Summary:
I am Princess Meredith, trapped in the kingdom of faerie, compelled to conceive a child, an heir to the throne, by engaging some of the realm's most beautiful men. Now Mistral, Queen Andais's new captain of the guard, has risked the Queen's jealous wrath to come to my bed. Our joining has reawakened old magic, mystical power so ancient that no one stands against it and lives...not even my strongest and most favored: my Darkness and my Killing Frost. Not even Mistral himself, my Storm Lord. But because Mistral has helped to bring this magic forth, he may live another day. If I can reclaim control of the fey power that once was, there may be hope for me and my reign in faerie. I might yet quell the dark schemes and subterfuges surrounding me. Though shadows of obsession and conspiracy gather, I may survive.

I'm confused by who wrote and edited this book because the first half was so not the Laurell K. Hamilton we were given for the first four books. I don't know if it was poor editing or she used a ghost writer for the first half because it totally fucking sucked. The tone of it was completely different to anything I've read thus far in this series. The first half was bland, extremely repetitive, especially, regarding sentence structure. (I get it! I go through the same issue but every sentence repeating the same adjectives and information?) For a published author who never did this in the four other books in this series it is extremely strange and alarming. There was no coherence from one tone of voice to another. Not only was the first half underwhelming but over doing it with the sex right away? Yeah, not a good way to start the fifth book. It almost seems like it was a generic, erotic e-book only writer that wrote the first half then handed the rest to Hamilton. It was actually difficult for me to keep on reading and it was almost to the point where I wasn't going to continue reading it. Evidently, I persevered and finished the book which I am so happy about because almost half way through I got back the old Hamilton and it ended on a great note. Obviously, not the story line but I just mean the tone/flow of the story.

I understand that in this story sex equals magic but like jumping right into it from the first scene in this book? A little too much for me. Add in the crappy writing for the first half and we have a disaster. Evidently, Mistral is going to be a crucial character for whenever him and Merry have sexual intercourse old magics are back in Faerie and many guards get their old powers back. They bring back wind, rain and magic back to the Unseelie dead gardens. It used to be a small clearing but it grew to an entire forest. Many of Merry's men just "disappeared" and "died" but really they come back in the picture towards the end of this book. Not only can she bring magic back to Faerie but she can also conjure doorways which led her to the Sluagh's dead gardens and seeing their King Sholto. It's right around this time that the tone and writing style goes back to what we are normally used to which is a great thing or else I would have had to give a terrible review.

In the Sluagh's dead gardens, not only is Merry attacked by Segna but we found out that Sholto was attacked by Seelie Sidhe who mutilated him and cut off all his tentacles. Without the tentacles, Sholto looks like the perfect Seelie Sidhe. Segna attacking Merry leads to all three including Sholto to be at the Island of Bones. At the bottom of the sea< Sholto finds the spear of bone and through the God and Goddess retrieves the knife of bone as well. Both are the strongest relics that the Sluagh's Kings used to wield when in power. When both Merry and Sholto unite sexually, they bring back ancient magics and it is Sholto who calls back the wild hunt that which is what the Sluagh originally was. The darkest and most unimaginable creatures that are part of the hunt. One look and a human can go crazy from looking at it.

I was a tad bit upset that Doyle was herding her away from the fight between her guards and the wild hunt but of course our Merry will always be part of the fight if her men are in danger. Jonty, one of the Red Caps, helps Merry to go back to the fight faster with Ash and Holly by her side. If she does not go out herself and fight then she cannot possibly ask her allies (the Goblins) to do the fighting for her. One thing that has been so fascinating for me is the symbiotic relationship that Merry has with the Red Caps. Almost as if her hand of blood feeds the power of the Red Caps and keeps the blood on their caps flowing continuously. I honestly hope that we can keep on discovering more about their relationship and how they are tied together. Merry of course saves the day (Yay for female heroines) with her hand of power; blood. Not only that but she also changes part of the wild hunt into cranes, swans etc. Just her thoughts alone are manifesting in real life presuming that Merry is not only changing faerie but she is also changing as well.

The men who disappeared in the Unseelie dead gardens are finally free but they reappeared in the hallway of mortality where Andais' prisoner's are kept. Not only does Sholto's and Merry's words change but so does Galen's. He says something along the lines of no more prisoner's and walls. It results to every prisoner being free including Cel! Merry can hear him screaming her name nearby but Andais begs Merry to leave because she couldn't be able to stop Cel from trying to kill her. I wish Merry could become powerful enough to get rid of Andais and Cel. Both are so similar where Cel has no self-restraint and it's like Andais is trying to undo her sins and misdoings through controlling Cel. And with the help of Sholto, Merry and her merry men traveled magically back to L.A.

Rating:
I am going to give Mistral's Kiss 3.5 stars on 5. Consistency is key in any book, especially, concerning the tone of it. The fact that it seems there was two writers instead of one to me is quite alarming. Honestly, what happened? If she wrote like that for the first novel I never would have continued reading the series but that she drops the ball and demonstrates such lack of care for the first half of this book just shows that maybe that's the reason why the series isn't complete after all these years. I'm sorry if I keep focusing on this but it's honestly troubling that it happened. Did anyone even bother editing it? With the four previous books I expected so much more. The reason why the rating is that high is because she brought it back up when towards halfway through the book it went right back to how it was and it ended on a satisfying note. When I finished it I wanted to pick up the next book right away. I hope that the next one does not have that choppy and disturbing writing style. Let me know what you guys think in the comment section! 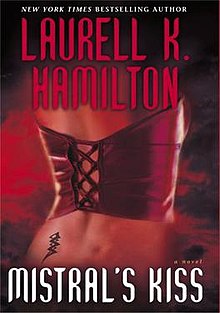