Summary:
I am Meredith Gentry, princess and heir apparent to the throne of faerie. To be crowned queen, I must become pregnant and continue the royal bloodline. If I fail, my aunt, Queen Andais, will be free to do what she most desires: install her twisted son, Cel as monarch...and kill me. My royal guards  surround me, and my best loved- my Darkness and my Killing Frost are always beside me, sworn to make love to me and protect me. Even now, we are forced into exile in the mortal world, hoping to outrun the gathering shadows of court intrigue. But King Taranis, powerful and dangerous ruler of faerie's Seelie Court, has leveled accusations against my noble guards of a heinous crime. I know that Taranis's true target is me. He tried to kill me when I was a child, and now I fear his intentions are far more terrifying.

Despite, a good 50 percent of the book being mirror calls from one monarch to another, there was a whole lot of story development and a lot of changes that happened rapidly. I know it sounds a little cryptic but if you do read it you'll know what I mean. There was an attack, a shit ton of mirror calls, a moment of creation, we lose Frost (sorta), pregnancy reveal, another attack and a rape. That is a lot to write about and the fact that Hamilton did it in under 400 pages is really remarkable. And throughout this book she did not drop in quality where in many cases when writers try to add more and use less pages it just gets jumbled and quality takes a hit and the overall tone of the story as well. But damn! Through and through one of the best books in the series. The last one left a lot to be desired but she redeemed herself and gave us a whole more to look forward to.

First and foremost, Taranis goes nuts and attacks Merry's guards through a mirror call, Doyle got deeply injured that he had to be taken out in a gurney! Yeah, it seems someone else had a power boost while magic was returning to faerie. But the craziest of all is that a Sidhe noble wants Merry to be the new Queen of the Seelie Court! Evidently, Merry doesn't accept it and decides she wants the Unseelie Court. I personally was a little worried because she always portrayed a more Seelie look when it comes to ruling. I'm all about equality but if I have assassination attempts I won't keep those who tried to kill me alive. If anything I would make sure they stay alive long enough to wish they were dead. Pretty morbid, I get it but in this world don't show mercy to those who will take another shot at your life.

One of the most intense scenes in the series was when there was a moment of creation in Mauve Reed's  massive mansion and it was transformed into part of faerie. Those who didn't have their own hounds that was brought back through magic were injured and close to death. Almost all recovered but Frost unfortunately was in a sense the sacrifice to have a new portion of Faerie to exist in the middle of human metal and human civilization. Frost was transformed into a stag. Some of the other guards said that he will be back but it could centuries before he is back as the Sidhe man. This is when we discover Merry has been pregnant for about a month with twins and the possibility of a third child in the future. Hopefully, it mean there’s more to the Merry adventure and with this little breadcrumb it might lead to more books regardless Merry has her Kings! Yes, as in plural, bitch got multiple kings. Each child as three fathers aka 6 kings!!! The father's are Doyle, Frost (sad face), Galen, Rhys, Mistral and Sholto! Ironically, one of the father's is Rhys who absolutely loves Merry but she doesn't have much love for him which is beyond upsetting. As the writer I would've put Rhys as the front liner before Doyle because of who he used to be and he is becoming. I would've done a loosely based comparison to Hades and Persephone. Rhys is a death God and Merry has the ability to bring back life but also death. Granted, it is a loose translation to the Greek couple but still a lot could have been done with just those two.

I also wish that the pregnancy reveal would have been completely different. Or at least we were part of the scene where the moment of creation occurred. A bunch of magic running around and yes 6 guys in one sitting is a lot but our girl Merry has got the stamina. I understand getting all six men in the same scene would take damn near everything to make it work but it would work. Or at least if we were given the scene where she actually becomes fully pregnant would've been great to have and not simply told she gets pregnant the night she comes back to LA after fleeing from Faerie.

Meredith ends up getting kidnapped by her uncle Taranis. He materialized through sunlight which seems it is an ability he has regained when magic has returned to Faerie. We don't know for sure and Merry doesn't seem a hundred percent sure either but Taranis might have raped Merry while she was unconscious. The book ended on a note of uncertainty regarding Frost. I'm partial to him and greatly hope that he comes back in his Sidhe form. Cel is still an ongoing threat and who knows what might happen when he finds out Merry is pregnant. I'm so excited to see what is coming next and now Hamilton has to really prove herself with the next book. We got to the end game, Merry getting pregnant. Her goal is achieved and now we have to see how the dust settles and what new great evils stand between Merry and her throne.

Rating:
I am going to give A Lick Of Frost 5 stars on 5! I'm so impressed with how Hamilton was able to put so many events in under 400 pages! That is quite a talent. I do hope that the next book has the same intensity and development. Merry achieved so much that I hope her story doesn't end on a boring note. I'm so happy that Merry is finally pregnant and I'm even more happy who the father's are! There's so much excitement in me that I can't wait to move onto the next book and that just proves how well Hamilton wrote this one. 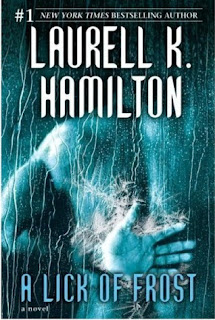 If you would like to purchase a copy of A Lick Of Frost you can click down below.
A Lick of Frost: A Novel (A Merry Gentry Novel Book 6)