Summary:
Merry Gentry, ex-private detective and full time princess, is now the mother of triplets, a rarity in the high ranks of faerie. And not everyone is happy about it, including Taranis, King of Light and Illusion. He's using the human courts to sue for visitation rights, claiming that one of the babies is his. To save herself and her children, Merry will use the most dangerous powers in all of faerie: a god of death, a warrior known as the Darkness, the Killing Frost, and a king of nightmares. They are her lovers, and her dearest loves, and they will face down the might of the high courts of faerie while trying to keep war from spreading to innocent humans in Los Angeles, who are in danger of becoming collateral damage.

First question! Who was the fucking idiot that wrote this summary? Because the summary comes no where close to even describing the book itself. The summary is what I wish the book was; enticing, imaginative and left me wanting more. But of course, it seems Hamilton has this uncanny ability to ruin a book series when all she really has to do is come up with creative story lines in a world that she has already fantastically created. She did such an amazing job and then it went downhill after Swallowing Darkness. By the way! Just in case the summary was misguiding which it was, nobody was killed except the one person I wanted to stay alive!!!! Merry's big, tough, warrior 'guards' did a freaking crappy job of protecting and investigating all of those who try to join her part of faerie. But before I start ripping Hamilton a new one, let's start all the way from the beginning.

When we finished the last book, we had this firm understanding that Merry was going to have twins and we left her barely looking pregnant. Starting this one, she is finding out she has triplets and she's ready to burst. No, like literally bursting and giving birth. Of course, this wouldn't be just normal newborns, they are so magically talented that they can actually do magic just out of the womb. Instead of taking this and running with it a whole new story line that could have been introduced, Hamilton spends a huge portion of the book describing how the kids look, how powerful they are, how they come up with a Cornish name for the word Rose (which they end up calling her Rose anyway! What the fuck was the point of that!?) and then Merry having a mental breakdown.

You know what would have been an amazing story line? Just like how Merry had a prophecy about bringing magic back to faerie, they should have discovered an even older one prophecy how there will be triplets born who are destined to rule all 3 courts (Seelie, Unseelie and the Sluagh) and faerie will finally be ruled in peace and harmony. Evidently, Gwenwyfar would be the ruler of the Seelie court since she has been described as the perfect Seelie, no physical 'deformities', perfect blonde hair and blue eyes. Alastair would be the ruler of the Unseelie court. I mean if I had the Killing Frost and Darkness as my fathers I would be scary as hell and proficient in magic and combat. Lastly, Tegan would be the ruler of the Sluagh, her father is Sholto King of the Sluagh, she has what looks to be physical traits of night flyers but obviously that wasn't confirmed. If Hamilton does not go down this route, she will be a huge dumb ass. It's weird how she hasn't thought of publishing prequels like; when Andais had her Coronation and became Queen of the Unseelie, Prince Essus when he married Merry's mother and the younger years of Merry's life (Andais drowning Merry), and even the events leading up to Merry having to leave into exile. These would all be fantastic ideas but would Hamilton ever think of them? Let alone do them? Highly doubt it.

Merry went from having 6 fathers to her children to 8, adding in Kitto and Royal. We only get the last two confirmed in the last chapter of the book. You want to know how chaotic, unstructured and how very little thought was put into this book? You just have to take a look at one thing. Sholto was killed off by being shot at in one chapter and a couple chapters later Merry is suddenly better and we find out Trancer killed Sholto because Taranis persuaded him to. Once that was resolved, there was no mere mention of Sholto other than he is one of Tegan's fathers. Sholto was the first Sidhe since Merry's three year exile that actually wanted her and wanted to protect her without any political gain. He deserved better than what he was given. I don't understand how any character can emotionally move on from their husband so quickly. Maybe cause Hamiltom doesn't have any foresight nor anymore creative ideas. The only progression that we have in the story is Sholto's death and it was so underwhelming. If you're going to kill someone, at least make sure we have emotional ties to the character. Merry wasn't in love with him, even said it to his face. So why kill a character without any build up? Just as his death ended abruptly so did Merry's grief. Also, Taranis the fucking bastard is still alive. So much for that crappy summary.

One last thing that I wanted to mention. Can we all acknowledge the sheer stupidity of how Merry can have an orgasm by performing oral sex? What kind of bullshit is that? I'm so happy that these novels are not geared towards men cause then Hamilton will be making them believe that women can get an orgasm by just giving head. I'm a single, 23 year old who enjoys sex. But all this ridiculous screaming her orgasm around a penis in her mouth is excessive. I had to stop reading and ask myself why am I putting myself through this torture.

Rating:
I am going to give A Shiver Of Light  1 star on 5. This book has been the biggest downfall throughout the series. Here Hamilton finally had a chance to have some real progression in the story and instead we were given a lackluster book that felt unstructured as if random scenes that were written years apart were haphazardly put together and it felt like it wasn't even edited at all. This book was beyond disappointing that I am going to take a break from Hamilton for a while. I wanted so much more from her and instead I had this sense of urgency to finish this book so I can continue on to another author who is actually talented. It is so sad but unfortunately very true. 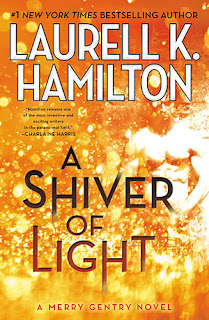 To purchase a copy of A Shiver Of Light you can click below.
A Shiver of Light (Merry Gentry)