April 09, 2020
(((This review will contain spoilers)))
Summary:
I am Meredith, princess of faerie, and at long last, I am with child;twins, fathered by my royal guard. Now I must stay alive to see my children born, as conspirators from every court plot against me and mine. They seek to strip my guards, my lovers, from me by poisoned word or cold steel. But I still have supporters, and even friends, among the goblins and the sluagh who will stand by me. Those who would defy and destroy me are destined to pay a terrible price. To protect what is mine, I will sacrifice anything, even if it means waging a battle against my darkest enemies and making the most momentous decision ever made as princess of faerie.

In this novel, so much has happened in very little time with a lot of story development taking place and I feel would have been the perfect way to end the series. The fact that there are 2 more books after this already published and more being worked on to me means one of two things. 1, Merry's story is far from over and there is so much more to learn and her story hasn't ended or 2, they are just trying to milk the cow as much as they can with this series. I do have the next two books which I will be reading and reviewing but after this book Hamilton literally needs to have Merry ascend in becoming immortal and a living goddess or she creates a new place of faerie for both Seelie and Unseelie sidhe who can co-exist together. Anything shy of this and I don't have much confidence the series can continue for much long.

As far as the story development goes, we had a lot of shit that happened. We have Cair; Merry's cousin who basically used magic on their Gran to try and kill the father's of Merry's unborn twins. It resulted in Sholto having to kill Gran, Doyle getting injured and with Merry's grief and anger calls to the wild hunt to hunt down her cousin Cair and name her a kin-slayer. This part I really enjoyed because we got to learn more about this "unimaginable and terrifying magic" which is only seems as terrifying because it is magic that has yet to take shape and form. Out of the magic came horses, hounds and only creatures that belong to folklore. Any who try to oppose the wild hunt is forced to ride with them until the hunt is over and the magic disappears. Merry ends up killing Cair but in the process learns of a plot to kill Mistral as well. Effectivbely, trying to rid her of some of the most powerful warriors faerie has ever seen. Mistral being especially, powerful because he was one half of the creators who brought about the sluagh to life. Mistral and another goddess thousands of years back created the sluagh but since she died and Mistral has lost most of his power not many know this of him.

Merry ends up saving Mistral from another assassination plot while also healing Doyle from Cair's magical spell. But two great things occur after that. The sluagh crown Merry the queen of the sluagh but also her and her men regain some of the oldest, most powerful and lost magical weapons that belonged to faerie. Most of these weapons either belonged to a god long ago or they disappeared because their welder was not strong enough and worthy enough to keep them. Not only has Merry been crowned Queen of the sluagh but after basically going through a war zone between the human military (trying to protect Merry) and Cel's supporters (trying to kill Merry) she as well as Doyle are crowned King and Queen of the Unseelie. The lang of faerie itself crowned those two as rulers. (I'll get right back to this.)

While the human military were trying to get Merry and her men out of faerie, they end up getting ambushed by Cel and his followers. Of course, his mother Queen Andais allowed her son access to her weapons vault and knew of his attack on Merry. Furthermore, she risks herself to protect her son. Despite this, Merry fights back with the help of the goddess, she heals the humans who risked themselves to save her, finally has an understanding of her hands of power and how to use them to heal and to destroy. Doyle fighting Cel was definitely a fight that we have long been waiting for but I was thinking NO! I don't want Doyle to kill him but Merry. Before Merry killed Cel, she figures out that it was Cel who murdered her Father all those years ago. There is nothing more satisfying than having our heroine murder the antagonist who murdered her father and also said she would never be fit enough to be Queen. Ironically, she kills him while being crowned the Queen of the Unseelie by faerie itself. Even though Cel didn't have many scenes and dialogue, his character held a lot of power and was a force to be reckoned with. Once killing him and being the only heir left to the throne, what plot are we left with? The original plot and story line was resolved. Merry and Doyle were crowned King and Queen of Unseelie but they gave up their crowns to get Frost back; Doyle's right hand and Merry's lover.

Frost is back and very much alive, Merry was literally crowned Queen of not only the Unseelie but also the sluagh, she's pregnant, all her men are safe and Cel is dead. The only little question left to answer was if Taranis would get arrested for raping Merry. But beyond that everything else was resolved. This to me would have been the perfect ending. Granted i'm sure there is more to learn but for the most part this is a great ending to give to Merry. One thing that truly bothered me was the grammatical mistakes I kept finding. I'm talking about more than a few because finding so many of them just hindered my reading experience and it felt like sloppy editing to me.

Rating:
I am going to give Swallowing darkness 5 stars on 5. Despite, the grammatical errors I really did enjoy this book. It was nice that after all the battles we finally have Frost back, Cel the bastard is finally dead and by the hand of Merry and Merry can finally relax and have her happy ending. 1 woman and 6 men, what woman wouldn't be happy with that outcome? I did say and I will say it again, this book positively ended as though it was the series finale because the main plot was achieved/resolved and we weren't left on any cliffhangers but that little Taranis story line. I hope that the next book in the series is not a disappointment. Fingers crossed for the rest of the series. 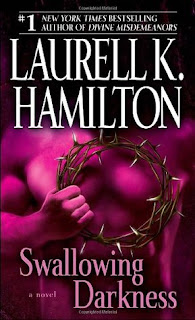