Something isn't right at Guardian Castle, and Aine can't figure out what. As Healer, she's supposed to be making things better, but there's a darkness that can't be brightened. And then Aine finds an injured Fomorian--winged, dark, blood-thirsty and inherently evil. Or is he? Because there's something about Tegan that Aine can't resist...and once they've shared blood, Aine realizes that everything she's always believed is going to be cast aside....

As far as short stories go I really enjoyed this one. I read the first three books in this series almost ten years ago and I absolutely loved them. I don't remember much of the plot other than there was a bunch of centaurs and goddesses. So, this prequel is a nice introduction into the world of Partholon.

We are introduced to Aine who is a healer and through her we find out a little bit of the history of Partholon how the Fomorians and her people fought 325 years ago. Fomorians through legends are said to be grotesque, evil looking demons who are the bane of Partholon's existence. When meeting Tegan; a actual Fomorian, Aine realizes that Tegan is no where close matching the description of the evil Fomorians other than his wings that mesmerizes her.

Maev, Aine's friend and the Huntress of the Guardian castle ended up being attacked and killed. Everyone at the castle said that she was attacked by a boar but before Maev passed away she relied the message that the warriors know who attacked her and the darkness that is coming. Aine, upon seeing Tegan automatically thought he was the suspect but when the two of them bonded, it became apparent that he wasn't the one who attacked her. When they finally mated, Aine unfortunately comes across the actual 'evil' Formorians. Formorians are not evil by nature but once they welcome the darkness into their hearts, they transform to what the legends say they look like. This darkness has already invaded many guardians from the castle including their women. Many of them were pregnant by the evil Fomorians but with Aine's quick thinking she was able to end their lives and free their souls from the Darkness.

Throughout the story, I was desperately craving more of the backstory. Just telling us that there is this magical place called Partholon and that Darkness is trying to invade it is not enough. This prequel did make me wanting more which I understand is the motivation to start reading the first book but I would have appreciated a better layout of Partholon other than it is filled with colour and happiness.

Saying that Tegan's and Aine's love is forbidden without actually going into detail why other than their people were at war centuries ago doesn't really instill why their love is so forbidden. I wish we got a little more on that as well. Them getting their ever after in the human world doesn't exactly explain how they are saving Partholon other than protecting the goddess' urn until a young woman who is meant to be the incarnate on the urn comes along and takes the urn.

I feel like there was a lot of meaning and explanation about their story that was missing and if Cast would have included it then it would have tied the story together better. I love that Cast included the name of the next novel in the story Divine by Mistake which will actually explain what the young female incarnate will go through. Cast is an amazing writer because even though she didn't include a lot of detail she is still able to captivate her audience.

Rating:
I am going to give Divine Beginnings 3 stars out of 5. I liked the introduction to the world of Partholon and even though not a lot of detail was given Cast was still able to entice me to continue reading till the end and make me want to start the next book right away. For a prequel, it's not bad but I don't think someone who hasn't read the series before would feel the need to read it. I have a good track record with Cast but someone who hasn't read anything from her before would want to by just reading this short story. It does need some work but honestly? It's not the worst thing I have read recently. 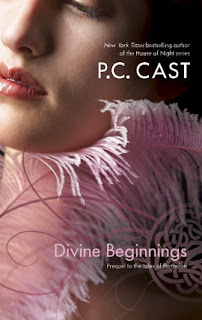 If you would like to read this book you can purchase a copy by clicking on the link down below.
Divine Beginnings (Partholon)