May 13, 2020
Product Summary:
The exclusive great little grabber gets to each and every lash with precision for lots of volume from corner to corner. Volume builds with each coat, no clumps and no mess. It is also contact lens safe. Costs around 6.99$.

From the very first application on my lashes, they clumped together! I don't know where the no clump claim came from but here I am trying to make my lashes look fuller and longer, instead I get a clumpy mess. One application and it is a mess, if I try for a second application it's a hot mess and I get spider lashes. Definitely, not a cute look. It's so frustrating and I have to brush my lashes apart with a spoolie but then I get a lot of fall out on my upper cheeks. This product is a mess to use from start to finish. It does make my lashes look fuller but the process and hard work to get there is simply not worth it. 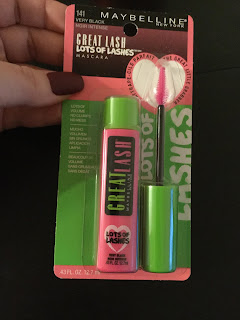 Mascara should be the easiest part about a makeup application so when a product like this one falls short, it adds more work than needed in my makeup routine. I will admit this is the first mascara I have come across that I can apply on my lower lashes and not be looking like a raccoon after a couple hours. The worst part of using this mascara is taking it off!!! Not even my best makeup wipes and makeup remover can truly remove it. It can be days later and I still wake up with what looks like a black eye from all the residue.

Rating:
I am going to give this mascara 1 star on 5. This is one of the worst mascaras I have ever had the displeasure of trying. It is too much work for just a mascara and the last thing I need is a extra step in my makeup routine. I would not repurchase.
If you would like to try this mascara you can purchase one by clicking on the link below.