This episode starts right where we left off in the previous episode with Bill yelling at Sookie for her irresponsible decision to let Jessica see her family without realizing the potential consequences.  Honestly, what does Bill see in Sookie? Aside from the fact that she's the only woman who finds him attractive. One thing I really need to point out is the terrible acting when it came to Bill 'driving'. Steering left and right harshly and quickly is not how you drive unless you're having a seizure at the wheel. I hate seeing this type of 'driving' in movies and TV shows because it is beyond unrealistic.

The creepy creature with the claws and bull mask attacking Sookie reminds me of the Minoans. They were heavyset on bull imagery but there was no evidence of them wearing bull masks during rituals. They were mainly situated on the Greek islands, primarily, Crete thousands of years ago. If the bull creature is connected in any way then they are very far away from home. I will applaud whoever did the special effect  for the wounds on Sookie's back because it was so realistic and gory that I wanted to throw up!

Sookie is either very brave or has no sense of self-preservation for standing up to Eric and slapping him for locking up Lafayette in the bar's basement and leaving him to rot. In her place, I definitely would have yelled but I would not of slapped a thousand year old vampire viking nor threatened him. Of course, Eric being the opportunist convinces Sookie to go to Dallas to help find a missing vampire.

It's funny how one thing that Sam said while leaving a voicemail for Tara was to "open her eyes" to the Maryann situation which she ended up doing. The little party they ended up having was very close to being an orgy. Everyone was drinking, getting naked and some seemed to be having sex. I'm happy that Tara is finally realizing that everything is not as it seems when it comes to Maryann. Also, in the closing scene of the episode we see the same scratches that Sookie received from the attack on Daphne's back. It's ironic how both Daphne and Maryann showed up around the same time.

Highlight of the episode was the blooming and, hopefully, long lasting relationship between Jessica and Hoyt. Jessica is learning what it means to be a vampire and enjoying her newfound freedom as a vampire. While Hoyt is still under his Mother's control trying to find someone to experience the joys of young love with. They seem like a good pairing and hopefully we see this love blossoming. 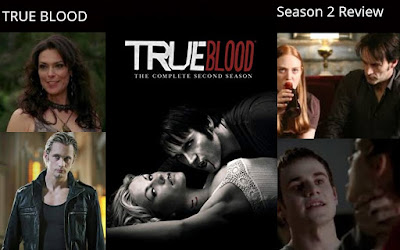 To watch this episode you can click down below.