Summary:
You may know me best as Meredith Nic Essus, princess of faerie. Or perhaps as Merry Gentry, Los Angeles private eye. To protect my unborn children, I have turned my back on the crown, choosing exile in the human world with my beloved Frost and Darkness. Yet I cannot abandon my people. Someone is killing the fey, which has left the LAPD baffled and my guardsmen and me deeply disturbed. I thought I'd left the blood and politics behind in my own turbulent realm.But now I realize that evil knows no borders, and that nobody lives forever even if they're magical.

The first thing out of my mouth when I finished this book was "this was disappointing". And yes, it was extremely disappointing. Like I have mentioned before in a previous review, Swallowing Darkness for me felt like the final novel only because the main plot was resolved and came to an end. Even the final chapter of that novel felt like the closing of the series. When the main plot comes to an end and the author does not replace it with something else then it feels like the story is dragging on and that there is no development. This book felt like we got to know a tiny bit more of the characters but beyond that nothing major was revealed or nothing that truly added to the story. This truly feels more like a filler book. Giving us unimportant content till we get to a major plot line reveal. But alas! No such thing happened.

There was only 3 main things that happened throughout this book. 1. Merry had a lot of sex. Like, I mean a hell of a whole lot. Fuck it, the majority of the book was her having sex. At one point, when I kept reading through and I would stumble into another sex scene I would roll my eyes so much I was afraid they would stay stuck that way. I understand in the previous books why there were sex scenes. She's trying to get pregnant! But here she is already pregnant but she has more sex scenes in this book than ever before!!! Did Hamilton have such a lack of confidence in her writing that she had to basically smother us with sex scenes? 2. We find out that the father's to Merry's unborn babies have all previously been married and had children. And every wife and child died. Merry did seem disturbed but then again I think any woman in that position would have been disturbed about that as well. And 3. We discover Donald or actually known as Donal from the first book A Kiss of Shadows who had sex with women who had fey ancestry and try to steal their magic. He says he was unaware of that but then he seemed to have the answers to who was killing the fey in LA. And I blame Hamilton for that sloppy writing and lack of creativity. There were multiple crime scenes throughout the novel and all these powerful Sidhe warriors couldn't figure out how two killers could kill multiple fey creatures at the same time. But yet the tipping point was this Sidhe wannabe has all the answers that Merry was seeking and her lovers couldn't find? Very sloppy writing in my opinion.

I expected so much more but what can you do when there is technically no more plot and story lines? Just write an entire book and hope it's satisfying enough when the actual plot has been resolved? Like I've already said, I am just disappointed. All the previous books had a sense of adventure and discovery and this one was just bland compared to all the others. Yes, we have a new faerie sithen but we won't be introduced to it till the next novel. And the soldiers that Merry healed are now able to heal others and when they pray for her she can appear to them. Sounds almost like being worshiped and if anyone discovered that, she and all her men can be exiled from the states.

Rating:
I am going to give this book 3.5 stars on 5. Definitely, a low rating for Hamilton but after her not being able to produce more plot lines to keep us readers interested for the next novel it just ends up being a whole lot of disappointment. Now it feels like the story is dragging on and we have to continue reading out of loyalty and not out of interest. Aside from the crazy sex scenes, she did keep it compelling with the crime scenes but the resolution for them was lackluster to say the least. The only reason she didn't get a lower rating is because the actual writing is not bad it's just the lack of foresight that really stopped this book from getting a higher rating. 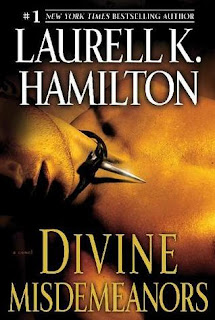 To purchase a copy of Divine Misdemeanors you can click below.