Movie Summary:
Our favourite sarcastic and wisecracking mercenary DeadPool meets Russell, an angry teenage mutant who lives at an orphanage. When Russell becomes the target of Cable, a genetically altered soldier from the future. Deadpool makes it his mission to save the boy from a terrible death. DeadPool ends up teaming up with powerful mutants to hopefully change the present, future, and the past.

Of course before we even have a word spoken in the movie we have a Wolverine reference more so concerning the Logan movie. In the opening scene, we see typical DeadPool acting depressed and self-destructive. No, I really mean literally. At least on the self-destructive part. He lights up a bunch of oil filled barrels and we have a huge explosion DeadPool style. Funny enough, we have a foreshadowing where DeadPool tells the audience he will die in this movie. You gotta enjoy him breaking the fourth wall every chance he gets. That is where I find the character is played and scripted phenomenally.

Here's what I don't understand about DeadPool. He is a contract killer with great reflexes and should know by now thanks to his many years of experience that he should have made sure the area was clear of bad guys before having Vanessa exposing herself with the door wide open. It's stupid how he senses people are at his door before the attack but wasn't fast enough to stop the bad guy from shooting Vanessa.

I absolutely love Russell! "stay back or I'll fucking kill you!"I do have to say that is totally me in the face of on-coming affection. It's ironic in Wade's way of trying to be the hero and helping Russell, he ended up killing a guy, getting tackled by Colossus and thrown in mutant prison with a mutant ability suppressing collar; allowing his cancer to come back full force.

The idea of X-Force, DeadPool's new and quickly killed team featured some cool actors and funny characters. We see actors like Bill Skarsgard and Brad Pitt! Although, Brad Pitt can only be seen for about 3-4 seconds and has little to no importance in this movie. But Domino! Man, she is amazing! It's refreshing to have a strong female presence in an all male genre. I obviously have to mention her kicking ass time and time again! I don't care if luck isn't a mutant ability it might as well be because she did more than her whole team combined. She is so awesome! Her fight against Cable was beyond phenomenal. I could just keep watching her fight. I want to see her in another DeadPool movie!

We needed a huge epic villain this time around because in the first movie I didn't really think that Francis was a great enough villain to showcase DeadPool's abilities. And we got the epic true to original comic book appearance Juggernaut!!!!Even his get-up such as his helmet and his stature is true to the comics. Of course we get his "I'm going to rip you in half now." And he literally rips DeadPool in half. Now I'm not one for gruesome scenes but this was epic!

And of course what do we do when we have an epic fighting villain like Juggernaut? We get an epic fight!It was great seeing Juggernaut and Colossus fighting. It was refreshing seeing Colossus fighting dirty and loosening up. Of course it took a couple mutants to get a beast like Juggernaut down but if anyone was paying attention during the closing scene you would see at the bottom right corner Juggernaut getting up from the pool that he was electrocuted in. Maybe forewarning us that we might see him again?

I don't know what happened but for the last little bit of the movie we have people sacrificing themselves left and right! At first, we have DeadPool taking a bullet that was meant for Russell. It's quite touching to see DeadPool evolve and connect to someone who he owes nothing to. Even though, he says he is not a hero. He goes above and beyond as a hero would.

And next we come to Cable. Funny enough we have the same actor who is playing both Cable and Thanos. Heck, even DeadPool comments on this. But I wish we had some more insight on Cable's backstory. I know they gave us flashbacks but I would really enjoy seeing more of this character. He only had limited amounts of trips that he can take either going into the future or the past. Instead of going back into the future back to his family after everything has been settled with Russell, he instead went into the past, inserted the token that he stole from Wade back into his suit and saved his life! Thus, sacrificing the chance of going back to his time and family.

I think the most DeadPool thing to happen was him using Cable's time travel machine to "fix" the X-Men timelines. Gotta love Wade and his sense of humour. I definitely have to say that I really enjoyed this movie better than the first.

Rating:
I am going to give DeadPool 2 4.5 stars on 5. I really enjoyed this movie! It had funny and serious tones, it was well scripted, directed and even well played by the actors. It was a tribute to the new and old that we have seen in the X-Men universe and it's a movie I never thought I needed to see. Definitely better than the first. But the reason why it's not getting a perfect rating is because I did find at times that the scenes dragged on and of course the whole Vanessa dying scene was a big problem for me as you read. But otherwise, it was a great movie! 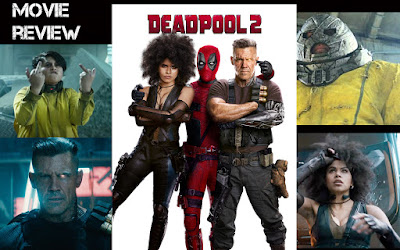