The opening scene is quite something. We have Sookie looking like Carrie from the prom, Ginger is vomiting and screaming non-stop, and Bill killed Longshadow because he was going after Sookie. I'm pretty sure he wasn't supposed to do that. It's quite disgusting how a vampire dies. Quite a huge mess that is left behind. All that was left was a huge puddle of blood, guts and clothes. As if Sookie's night could not get any worse as soon as she gets home her cat is hanging from her ceiling fan, swinging blood all over the place. It's like one bad Halloween trip after another.

After the non-stop hell that Sookie has endured it's about damn time that Bill took responsibility and admitted it's his fault that everyone around Sookie has been dying. I just don't understand why Sookie would persist on staying with someone who has been the cause of such traumatic experiences.

What has been super strange was the weird drug experience that both Jason and Amy were on using Lafayette's vampire blood. The highest I've ever been was on weed and never have I experienced swimming in water with the rain forest as the background. What a fucking trip.

It's weird that there are strict vampire laws and if you kill a fellow vampire there are severe consequences. Because Bill killed Longshadow he has to go to a tribunal. So I'm assuming that is some sort of trial for vampires. You would think being a supernatural creature life wouldn't have so many rules. Personally for me, if I was a vampire I'd be killing other vampires if I wanted to without care.

Eddie the vampire telling Jason that Amy is a psychopath doesn't seem that far-fetched. I mean think about it, she's a V addict, has experience with kidnapping vampires and her reasoning is just off the charts. I really want to know more about Amy and her backstory.

But my oh my, the ending of this episode was quite something else! We see the dog that hangs around Merlotte's followed Sookie to Bill's house. We see both the dog or 'Dean' and Sookie fall asleep. But when she wakes up she finds Sam lying naked. Hmm, anyone smell another supernatural creature being introduced in the True Blood universe? 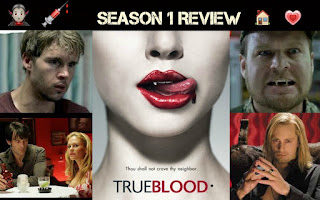 If you would like to watch this episode you can click on the link down below.
True Blood: Plaisir d'Amour