Night At The Museum: Secret Of The Tomb (Movie Review)

Summary:
Larry Dalley (Ben Stiller) now the director of Night-time Operations at New York's Natural history museum must find out why the exhibits are behaving strangely, Larry learns that the tablet that brings all the exhibits to life has started to decay. Now it is up to Larry, the help of his son and the exhibits to find out how to prevent the tablet's magic from disappearing.

Opening Scene:
We see a father and son back in 1938 in a dig site in Egypt. By accident the son falls into a tomb and we see how the tablet in New York was discovered. Not only do we see the discovery of the tablet but we also see the discovery of Ahkmenrah's tomb and that of his parents. Funny enough this was the start of the circle of information. Of course there is some random guy saying that the tomb mustn't be disturbed or it will be the end of the world! This scene strangely reminds me if The Mummy; anyone else? The father obviously ignored the warning and removed all artifacts/tombs. This scene felt like such a cliche.

When seeing the tablet decaying back in New York, you could obviously tell that there was some CGI  involved but I guess they thought we would think it's magic. Not off to a great start.

Guys, Guys, Guys the constellations coming to life was so cool and breath-taking.

Another similarity to The Mummy: Returns is when Dexter was grabbing a skewer and facing a woman both screaming instantly reminded me of Johnathan and that mummy monkey.

Was I the only one who went WTF when I saw that they hired a new actor to play Nicky? Eww, this changes a franchise entirely. I don't like how this new actor plays Nicky. Nicky in the previous movies was a smart kind kid and now this? Gosh, this is discombobulating.

We eventually find out that the kid in the opening scene was actually Cecil. One of the old night guards of the museum. It was nice seeing them in the final movie. After meeting with Cecil, Larry and the exhibits head to the British Museum and there we see Rebel Wilson. Btw Rebel's British accent was horrid! (Get what I did there?)

Sir Lancelot came to life and obviously he as going to steal the tablet. He was raving about being on a quest for the 'holy grail?' or something like that. On his journey to God knows where the tablet brought to life lion statues. Funny enough, the lions got distracted by a flashlight. Lancelot ends up at a play titled 'Camelot' which he looked more confused than a puppy looking into the mirror. Hugh Jackman doing his Wolverine thing was beyond lame!

The reason why the tablet was decaying was because the tablet's was away from the moon/moonlight too long. Like almost four thousand years away too long. I wish my I-pod's battery would last that long! I find that for an issue so big the solution was quite silly and ridiculous. The tablet was created for Ahkmenrah and his family so they can stay together even in the afterlife. Well momma, beat that! lol

The ending for me was emotionally upsetting but we all need to move on and say goodbye. This movie franchise started when I was still in Elementary School. What really got me teary-eyed was when Larry and Dexter kissed. That was such a beautiful and tender moment. But what hit it out of the park for me was when 3 years later if moving on Larry sees the museum in New York having a party inside and instead of going in he just walks away.

I find this symbolism quite telling. Larry's growth overall has come to an end. While him walking away he passes on the torch of duties and is saying goodbye to his family at the museum. Just like we the audience is saying goodbye to this franchise that has been part of our lives for almost a decade. I grew up watching Robin Williams and this movie was like a final hooray to him being alive in my memory. It's so upsetting how he passed away but we can all sit back and pray that he is up in Heaven having the best of times.

Rating:
I am going to give Night at the Museum: Secret of the Tomb 3.5 stars on 5. There were some areas that needed work such as; the plot itself which should have had a more intricate story line than what was given, CGI which if done correctly can definitely amp up the rating and having a new actor to play a character that we've been presented to already and him changing the feel of the character completely just really turned me off. However, it still was a beautiful and sad ending. And it felt like I was saying goodbye to an old friend when watching this movie.

Hoped you enjoyed this review. Follow for more reviews💖 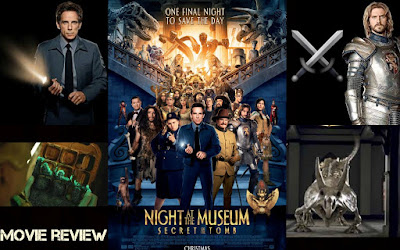 ***Not Cruelty Free 👎***
This silky, lightweight formula is meant to smooth the skin and correct complexion in seconds. This formula contains essential soy which is "proven" to correct and brighten skin tone while also reducing the look of dark spots, pores and wrinkles. It also helps make-up to be applied smoothly and last longer. The SPF in the tone corrector helps the skin looking healthy. It can be worn alone or with makeup. It contains SPF 15 and is for all skin types. This product costs around $20 but I got it for a $1! For more information on this product check out +Neutrogena Canada website here.
Essentially, this is a tone corrector and it can be used as a primer after moisturizer. When I read the description on the box I was praying to God that this would work because as I've previously stated in the past few blog posts I've written; this summer my skin has been freaking out with pimples and in consequence I have dark spots all over my chin area where I p…
Read more