December 29, 2014
Now I know all of you are gonna say Amanda, Heroes have been off air for 4 years now! Well yeah I know that but one thing I love to do is wait until a TV series is done just so I can watch all the seasons at once. And that's what I did with Heroes. Although, I do have to agree waiting for 4 years to finally watch it is pushing it. But off to the series itself.

Heroes is about ordinary people with not so ordinary abilities from healing, to flying, to super speed and everything else in between. This series was in many ways incredible and many ways disappointing.

Incredible because you get to see people with incredible powers and abilities trying to handle them, find love with them, and some of the adventures that they had was simply great and awesome. I loved the different story lines that they had. The whole Prima-tech cover up was awesome and seeing Claire's dad being total Rambo was cool. And I also loved that the series expanded into different time periods.

Heroes was disappointing in ways because at times I just wanted the series to be over. During some seasons I just wanted to get it over with and finish all the episodes. I felt a lot of the scenes just dragged on and on. What really sucked is that in one season there would be one or two exciting story-lines going on and the rest of them were really lacking depth and excitement. Some story-lines for example the Petrilli father being alive was cool and a huge twist but what he really wanted to do wasn't that big a deal. Towards the end of his story-line he seemed like a comic book villain waiting to be finished off by the hero. See the danger but also the excitement of having several story-lines going on at once is that it can go either way. If written and produced correctly, such story-lines can become a huge success but if a season or an episode is dependent on just one single story-line and character well then it just takes away the magic and excitement for the whole series.

What I really enjoyed is that we had a solid villain from start to finish aka Sylar. But then again the whole him and Claire ordeal was totally weird! Claire was one of if not my favourite character of them all. Hello! She can regenerate whatever part of her body. She is immortal! That is freaking bomb! But yet her story-line didn't further develop past what her ability is. Granted she is part of the Petrilli family blah blah blah but when taking into account that she can never die I feel that there was a whole lot more that could have been done. She could have learned martial arts and weapons training to become a vital and deadly hero.

I feel as if the writers of Heroes focused more on the mundane side of the characters and less on their actual abilities and heroic adventures. I know that to show-case these abilities it costs a lot to produce but if you are going to create a series all about people having abilities well then show the audience the abilities! Find the proper budget and don't advertise a series as one thing then show us (the audience) something else.

And I wish the series would have been continued but unfortunately it got cancelled. What I really hated was how the last episode, the very last minute was the most excited I was during the whole season and then the show is cancelled can you say WTF!!!???

You can tell that the whole series was definitely hit and miss during the various seasons. What I hate at times with some t.v shows is that the writers (or whatever it may be) don't have the right mindset and creativity to create a universe that is cohesive and exciting. And that everything has to mesh properly. It was obvious that the first (maybe second) season was well thought out but then the rest of the seasons were just ideas jumbled up and put together.

Well that's all for this series review and off to the rating!!!!

Now I'm gonna give this series 5 stars on 10. Honestly I'm giving it 5 stars because half the time I was excited and on the edge of my seat and the other half of the time I was bored out of my mind.

But on a little side note Heroes will come back for season 5 for this year but apparently won't follow the story lines that the series ended with. Again WTF!!!??? This is somewhat of a separate series all-together. It is going to be titled Heroes: Reborn seems a bit promising but I will have to look it up!

What did you guys think? Was I being too harsh? Leave a comment below or send me a message :D And is this new series worth watching? Or will I be wasting my time? 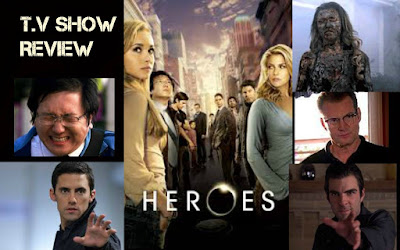 To watch and buy the complete series of Heroes you can click down below.