Movie Summary:
Captain Marvel is an extraterrestrial Kree warrior who finds herself caught in the middle of an intergalactic battle between her people and the Skrulls. Living on Earth in 1995, she keeps having recurring memories of another life as U.S. Air Force pilot Carol Danvers. With help from Nick Fury, Captain Marvel tries to uncover the secrets of her past while harnessing her special superpowers to end the war with the evil Skrulls.

The visuals for the opening scene was great and it was captivating up until you realize there was no monologue included. And all the smaller scenes afterwards were just random and chaotic. I understand that Vers aka Carol's mind is chaotic due to the lack of memories but just because the protagonist has a chaotic mind doesn't mean the viewers should have one as well. Personally, I think we should've had Vers/Carol doing a monologue in the opening scene, along the lines of "I am a warrior fighting for my people- We are known as the Kree." And goes into the details of who the Kree are then adds in "I live a life without remembering my past- Today I fight to remember who I am." If we could have been given something similar to this I believe it would have been a great intro paired with the opening scene. I understand that would be a very dramatic intro but let's be honest, that would be better than what we were given.

Aside from the chaotic beginning that needed to be changed, I did quite enjoy the progress of the movie and of the story of Captain Marvel. Carol finally discovered that she in fact was never Kree but instead was human up until she destroyed Dr. Wendy Lawson/ Mar-Vell's light-speed engine, specifically, the energy core of the engine that is powered by the Tesseract and she ended up absorbing the Tesseract's energy. Leading to her having all these awesome super powers. Dr. Lawson is Kree but was going to use the light-speed engine to help the Skrulls escape the Kree empire. Thus, making Carol the Skrulls best chance at survival.

It's ironic how it was the Kree who took her in for 6 years and tried to assimilate her to their culture. Making her perceive that the Skrulls were the bad guys when in fact it was Kree and their dominion over others and trying to force their power onto others that are truly the bad guys. Just because the Skrulls wouldn't follow and bow down to the Kree, they were marked down as their enemy. Sounds familiar, doesn't it?

From the beginning anyone could tell that Carol did not belong with the Kree or was even one of them. From the way she acted to her powers. Her powers alone she was quite more powerful than any other Kree. The Kree from the start tried to control and contain her power. Pretended that they gifted her with powers and that they can take them away. When in actuality, she is much stronger and greater than any of them combined. She fought against the hold of the Supreme Intelligence and fought against her ex Kree comrades to protect Maria and Fury, as well as the small group of Skrulls.

Watching Carol easily over-power and fight against the Kree for me was overwhelming. I grew up reading and watching comics come to life on the tv and on the big screen. So for me to see a female protagonist being extremely powerful and not needing anyone's help to kick ass was just fantastic to watch. Every hero and warrior shown in the media is usually male so for me to have a female hero being shown is inspiring and is so fucking awesome! Yes, her humanity was shown but once she has truly embraced herself and her powers she became unstoppable and is the weapon that conquerors want.

I know that a lot of people didn't like Brie Larson as Captain Marvel because she was trying to impose her man hating campaign and she greatly influenced the movie. Truth be told, that is a load of crap. That sounds like something an insecure man would say. I didn't see anything wrong with her being Captain Marvel. If I did, I would be the first to say something. One scene that truly stood out to me as a audience member and as a woman was when Carol was face to face with Yon-Rogg which he was stating she won't truly be ready if she cannot defeat him while in control of her emotions and of her powers. In retaliation, she blasts him and responds that she has nothing to prove to him. As a woman, we are always left playing catch up and having to prove our strength and worth to men. If we can keep up with the men then there might just be a place for us among them. But instead of trying to fit in, once she has finally embraced herself completely she made a place for herself.

This isn't just a superhero movie garnered for men to sit around and watch. Because those who did bitched about this movie and complained that this was a agenda filled movie meant to bash on men. Not at all fellas, this movie did have quite a few scenes of Captain Marvel beating up guys but that is just too literal. I feel that this was a superhero movie catered for women as well on a more profound level. Many may find this to be a feminist movie where in actuality this is so much more than that. This movie is meant to feel inspiring and motivational to not just women but to anyone who has been systematically put down over the years and told that they cannot achieve their dreams. Her dream was to be a fighter pilot and instead became a flying weapon. It might not have been what she imagined in becoming but being Captain Marvel is pretty damn close to actualizing her dream.

I need to talk about Goose now because he looks exactly like my cat Spicy. Wait a moment, is my cat a Flerken? Higher than above intelligence, understands human language and being super cute, yup kinda sounds like my cat. Kick ass alien species that both the Kree and Skrulls are afraid of. Goose ends up eating a couple of Kree and swallowing the Tesseract. It's quite funny seeing Goose and Fury interact together. Especially, when Fury kinda ends up adopting him and stating the Tesseract is lost but really it's just staying inside a cute little kitty. Furthermore, we finally find out why poor Fury got that missing eye. By a goddamn kitty scratching him! He gets scratched by Goose and it gets infected, finally giving us the one eyed Fury we are used to.

Rating:
For Captain Marvel I am going to give it 4.5 stars on 5! Captain Marvel was funny, witty and a badass! I loved watching her in action and getting to know that she inspired the Avenger Initiative and inspired the name for the Avengers! I'm super stoked we are getting a Captain Marvel 2 because I just want to see more of her. Like I've mentioned, I am not a fan of the opening of the movie and it did take a little while for things to pick but once it found its stride, there was no stopping it. This was a great female solo superhero movie and Carol making herself Earth's protector was just fucking great to watch! I overall really loved this movie! 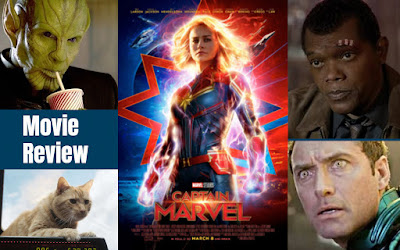 If you would like to watch this movie and own a copy of it click down below.