Horrible Customer Service Experience at Aldo and Call It Spring!

So today with my mom and sister we went to Place Versailles near metro Radisson. If any of you live on the island of Montreal you know more or less where I am talking about. And if you don't know well then it is a shopping mall.

So I went to a few stores but then I saw Aldo and I thought to myself 'no better place to check for cute purses' I've bought most of my heels from Aldo so I had a very good opinion of the store. So all three of us go into the store. It wasn't really busy and the first thing I noticed that bothered me a tiny bit is that I nor my mom or sister were welcomed or informed of the current sales. We were practically ignored. LOL scratch that we were ignored. The girl who was working there was standing in front of her counter and that's all she was doing.

I'm not the type of person who needs the red carpet laid out for her but being acknowledged is the least anyone who works in customer service can do. I've worked in retail before so I know how customers should be treated.

Then we find the little section where the purses are and my mom pointed one out to me and it was on a shelve with two other of the same purse but in different colors. And guess what? It was around $60 and I was going to buy it. My mom and I were just checking to see if it was long enough to fit my laptop in so we put the purse on the cashier's counter and asked the girl if it's okay to compare it to her computer screen. She looked at us with a blank face. GUYS I wish I was making this up but she just looked at us with a blank face. LIKE WHAT? Who ignores a customers question? Gosh that should've been a sign to tell me to leave.

So I put back the purse I was looking at and looked at the same model but in a different color. I turn around to grab the girl's attention AGAIN! She doesn't respond to me or my mom and she just talks to her friend. I was going to buy that $60 purse but when I saw she wouldn't even bother to stop her conversation with her friend then I told my mom and sister that we should leave and we did. Besides I wouldn't want that girl to get commission off of me when she couldn't be bothered to help me.

So I go to Call It Spring instead because they are sister stores (I think. Don't take my word). The girl working welcomed us but aside from that she didn't say anything else. Is it really that hard to be enthusiastic? I went to the purse section and I found a cute one but I wasn't too sure on the size. So my mom went over to the girl and asked if she had a measuring tape. The girl just responded no but not with any emotion. She could've been saying 'I'm sorry but I don't have one. Can I help you with anything?' What the heck was wrong with those girls. It's not too hard to speak with emotion and to care for customers.

Anyway we left that store again because if we aren't going to be helped well then buh-bye. We went to Bentley and the woman was so nice to us! She was even apologizing about those girls when we told her our frustrations plus she had a measuring tap on top of that. She asked what type of purse I was looking for and she said to me a little bit later in our conversation to bring my laptop next time so I won't buy a purse that is too big. God that woman was a Godsend.

So my rant is officially over but beware to all you shoppers! If you walk into a store and someone representing the store does not want to help you or does not bother to then don't put your hard earned money into that store and into their commission.

Okay rant officially over now. Hope my experience was revealing to all of you. 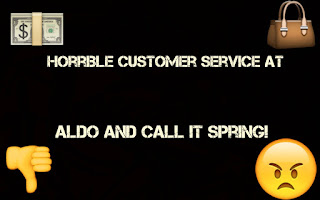