Movie Summary:
In 1960's California, a fake medium's daughter tries to communicate with her late father through a Ouija board, but unleashes a demon instead. This movie is the prequel of the movie Ouija which I have already reviewed. The review for the movie Ouija is here.

In the movie we are introduced to the Zander family. The widowed mother Alice and her two daughters Paulina and Doris. Due to losing her husband, Alice becomes the sole provider for her family and to earn some sort of income she performs séances to help her clients get closure from their passed loved ones. She makes money off of scamming people and she uses both her daughters to do it. Personally, I think it's really fucked up to exploit someone's pain and grief to make a few quick bucks. But using her own logic, through deceit she is able to provide some sort of comfort and closure.

It does not take too long for Alice to incorporate the popular board game Ouija to her act in hopes to spice up her act. But not too long after using the Ouija board, strange occurrences happen unbeknownst to her. It's fucking crazy to think that the God forsaken Ouija board in the 60's outsold Monopoly and was so popular. Granted the hype for the Ouija board started back in the 1800's but still! Doris is the one who is the most affected. While Paulina is being watched by this demonic entity that has been unleashed in the house and on the girls.

Not going to lie, aside from all the horror and death that happened it's cool that the ghosts helped pay for the house. It reminds me of this meme where someone is looking for a ghost in their house and when the ghost responded "yes", the person said "Cool, the rent is due on the first." Obviously, the money was found to ensure that the mother and the girls will stay within the house long enough for the demonic entity to take control of Doris.

I really shouldn't be judging the mother too harshly because I myself am not a mother but come on! Explain to me why you would use your daughter for séances but yet not being an expert on the occult or having any experiences- sorry REAL experiences with the dead? I think the mother was under the impression that her daughter had this amazing gift so it was her job to make sure as many people as possible  got a message from their deceased loved one's. Which that's cool but having no certainty of what talking to dead people does or why now Doris can actually talk to them but through a board is really being irresponsible and naive. I understand when bad things happen and your loved one dies you try to view life in a more positive manner and grasp at moments of hope but you can't forget to be rational.

When it comes to horror movies we always tend to get happy endings or somewhat happy endings. But let's be honest, those type of endings get quite predictable after a while. I enjoy that this movie doesn't give you the usual happy ending. You do see the mother getting some type of closure after Paulina kills her due to the evil spirits talking to her. Alice ends up seeing her husband and Doris on the other side leaving Paulina all by herself. The ending of this movie ends up with almost everyone dying. Paulina's almost boyfriend is dead, Father Tom even though he was a priest was still able to be possessed by the evil spirits and got his damn neck broken, Alice getting stabbed by Paulina and Doris' herself passed away when Paulina sewed her mouth shut to stop the voices. But unfortunately, the evil demonic spirit that possessed Doris' body still has control of it although it's nice that Doris' soul/spirit was able to move on. The only one alive is Paulina and even at that she's not 100% all there mentally.

Horror movies centered around Ouija boards have been over done that it's almost become roadkill. I feel this movie was held back using the Ouija board which was the reason why all these spirits started talking to Doris. I understand that this was a prequel of the movie Ouija which the story was very similar to what was presented but the only thing that was different was instead of the mother sewing Doris' lips it was actually Paulina. If they would have changed out the Ouija board and instead the story focused more on how mediums run through the Zander family which is why Doris was very susceptible to all the voices and spirits in the house. And all the scary stuff happening was because of the connection between the spirits and Doris getting stronger and less about the Ouija board itself. I feel if this was done then a lot more people would have liked the movie and we could have had a more solid scary movie and less of "Oh look. another movie about Ouija boards!". If done that way and removed the first movie Ouija we could have had a more solid movie franchise that could have lasted more than the two movies. Personally, if we focused more on Doris and the backstory of the evil spirits for example; having flashbacks of the monstrosities committed, maybe even having a movie centered on some of the mediums in the Zander family from a few hundred years ago this would be a horror movie franchise I'd be committed in watching.

Movie goers love to invest themselves in people. And if the movie was more centered towards the Zander family then it would have been a whole lot better. And I'm pretty sure there would have been a whole lot more movies in production. Look at how huge the successes are of horror movies based on spirits and ghosts like; Insidious and The conjuring. They succeeded and without the need of a Ouija board. It's just a shame that the writers who started writing this story out didn't think it through. Creating a universe can be tricky but once you have a solid family history you can pretty much make up the rest easily.

Rating:
I am going to give Ouija: Origin of evil 4 stars on 5. Overall, the movie was pretty great and was a huge success compared to Ouija. I enjoyed that the transition scenes were smooth and it wasn't just a bunch of random scenes put together. There wasn't a lot of different scene locations which was not a problem for this movie. I do admire that they were able to use multiple rooms in the house and still make the movie exciting and not feel stuck in repetition of scene locations. Other than having an issue with the whole Ouija board thing I really enjoyed this movie. 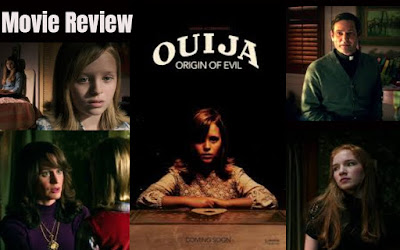 If you would like to swatch this movie you can purchase a copy down below.
Ouija: Origin of Evil